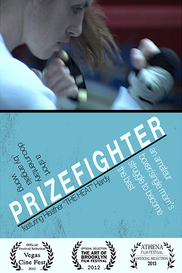 The 2012 Olympics featured women's boxing for the first time in its history, as the world's most renowned female boxers competed in front of a global audience. But this isn't Prizefighter. In the forgotten neighborhoods of Brooklyn, New York stands Heather "the Heat" Hardy. Still in the amateur league, Heather struggles to make ends meet for her and her daughter, Annie while training countless hours at Brooklyn's iconic Gleason's gym to become the next world boxing champion. Prizefighter is a short film (with a "direct cinema" style) that chronicles Heather's daily struggle, leading up to a championship match at the Metropolitan Championships in Queens, New York.

More info on the filmmaker: awongfilms.com/