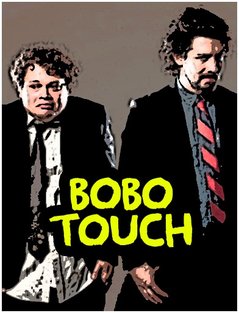 Bobo Touch (Brian Bonz and Mike Rizzo) fight evil on a day to day basis. They seek out bad behaviors and ill-mannered evil-doers and drop some knowledge about proper etiquette in Brooklyn and NYC, through song, dance & hair flips providing tips for a more courteous living...tips for the counterculture. Brian and Mike grew up in Bay Ridge, Brooklyn and are inspired by the Borough every day.

Brian Bonz is a songwriter/composer with a background in acting/writing throughout the years in Brooklyn, NY. His past album releases have been on Triple Crown Records and touring throughout the US with acts like The Get Up Kids, Do Make Say Think, Vacationer, Kevin Devine, Brand New and more. Recently he has been shooting shorts with friends and comedy skits with Casey Jost (Comedy Central), Rascal TV Productions, Tubby Thunder Productions, and more. Bonz plans to continue to create with Mike Rizzo every week like they have since they tried to remake The Crow as children as well as release a new solo album this year.

Mike Rizzo is an editor and filmmaker who studied film at the School of Visual Arts. He created the “Bay Rizz” comedy-satire web series in 2008 lampooning unsuspecting locals on important neighborhood topics getting a local buzz as the Daily News calls them the “Borats of Brooklyn”. These films were showcased in film festivals such as Coney Island, Brooklyn Shorts, and winning audience choice award several years at the Zero Film Festival. Currently Rizzo is a commercial editor at Mackcut in NYC. He edits TV commercials for clients such as Little Caesars, Toyota, Bud Light, PBS, Dell and many more. His recent film that he edited “Some Guys Are Bigger Than Others” just won Best Comedy at New York Downtown Film Festival. He also has a new indie short “Day Trip”, that is set to premiere later this year.

The best of Bobo: